So life at Tango's is a mess!!!
I had to take DH to the ER Thursday night. He was having excruciating pain in his head.Crying, whining, hollering men are not a pretty site! We get there & get back in a cubby & another guy thought the whining crying thing was a good idea too! So for 4 hours this goes on! ughhhhhhhhhhhhhhhhh
So all of his sinus's are infected, causing the pain & he's now diabetic. They gave him a pain shot & a antibiotic shot in the butt. Gave him a script for Avelox & pain meds. So the Avelox is too strong for him & off to the clinic we go this morning. He's gasping for air & from 8am till 12:30 we are there. So now to stop the Avelox & get a z pack & Augmentum. And yes he's still whining & crying & I can't take it anymore! I'm ready to have a nervous breakdown. I had to call in to work & she wanted me to find someone to take my shift?? I was like I don't have time for all that?? WTH!!

So on to me the chiro called on Friday & that mass is a fibroid attached to the outside of my uterus & he said that because it's calcified they are benign!! Thank you Lord!

I was off Sunday but had to go in for a meeting at 9 which was very productive all was aired & I feel better about it!
I made`a pot roast in my new dutch oven!! Love it!
I finished my stocking for the giveaway!! I think it starts December 1st! 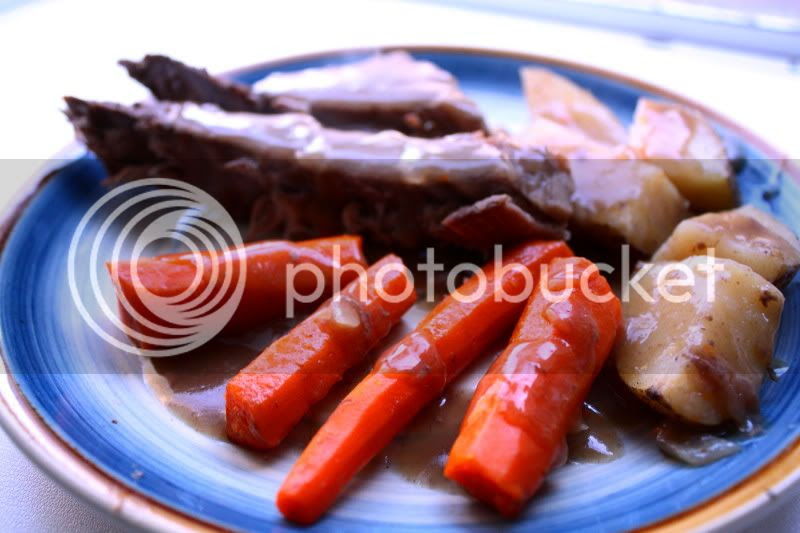 The pot roast looks good. I need to go cook something for my supper

Oh my I am so sorry your DH is so ill. Yes some men folks carry on sooooo much..mine too;-)
Hope things get better soon. I too did a roast for supper!
Hugs,
Lola

Great news!!! Now if you can just get hubby feeling better. Surely the post roast took a little of the edge off for him?

All in all...it is good news....right??? Sometimes it is hard to take when everything piles up at once.

Yum on the pot roast - one of my favorite meals!!!

Men are the worst babies...hate to see them pregnant....

Hey Tango! So sorry to hear that your hubby is ailing....I hope that now all the meds are worked out, he'll be feeling better soon! And yes, some men are big babies when they don't feel well....I agree with Barb...if a man ever had to endure pregnancy and childbirth, the world would come to an end because they wouldn't do it!

Glad to hear that your health scare ended up being nothing that you have to be afraid of. Do you have to have it removed?

Ohhh, that pot roast looks so good. I swear, every time I read your blog I gain weight! LOL!!!